The world-renowned Kruger National Park offers a wildlife experience that ranks with the best in Africa. Established in 1898 to protect the wildlife of the South African Lowveld, this national park of nearly 2 million hectares is roughly the size of a small country, e.g. Portugal.

SAN Parks – Kruger National Park is unrivalled in the diversity of its life forms and a world leader in advanced environmental management techniques and policies. No other park can offer such an extensive safari experience.

Ecosystems within the Kruger Park are highly varied. Six rivers feed the park – an area that encompasses an astonishing 16 vegetation zones including 1980 plant species and 300 tree species.The dense Mopane woodland of the North changes to open savanna plains in the Central Region, speckled with Acacia and Marula Trees. The South is different again with its lush riverine vegetation amid granite boulders.

The diversity of its flora is matched by an equally dazzling variety of mammalian, avian, reptilian and amphibian species. 507 bird and 147 mammal species reside in Kruger, while recent surveys substantiate the presence of 7000 elephants, 2000 lions and 400 endangered wild dogs. These animals roam freely into the neighbouring reserves, such as the Sabi Sand and Timbavati reserves, and Thornybush in the Kruger Surrounds areas.

When planning your Kruger Park golf safari, keep in mind that this is one of Africa’s largest national parks and it spans across two provinces in South Africa, namely: 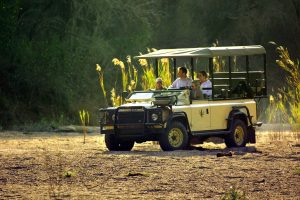 Mpumalanga, which means “land of the rising sun” in the local SiSwati language, has it all – from the exhilarating wildlife of the Kruger National Park, to secluded mountain retreats, ancient ruined cities, wild water sports, and some of South Africa’s most diverse and vibrant African cultures. In short – the perfect destination for a Kruger Park golf safari.

The province’s year-round sunny weather, soaring peaks, steamy jungles and expansive waterways have also made it home to a bewildering array of adventure sports, from expeditions down the world’s oldest caves, to taking flight at the continent’s largest paragliding festival and many spectacular golf courses.

Mpumalanga offers rewarding opportunities for the outdoors enthusiast: golf, hiking, trout fishing, bird-watching and horse-riding. Mountain streams and rivers crisscrossing the massive wilderness, which were once panned for gold have become the setting for lazy trout and fervent anglers.

Enjoy the breathtaking scenery in Mpumalanga en route to the Kruger National Park. We can highly recommend a visit to the quaint town of Dullstroom and travel over the Long Tom Pass with its spectacular panoramic views to the charming forestry town of Sabie, before returning east to Hazyview.

This area is home to the Mac Mac Falls, The Bridal Veil, Horse Shoe Falls and many others cascades where you cool off in the crystal-clear pools. It is also well worth visiting the historic town of Pilgrim’s Rest before continuing on to Burke’s Luck and the Blyde River Canyon, which is the third largest in the world.

Nelspruit and it’s surrounding area is home to fantastic courses such as Nelspruit Golf Club, White River and the Sabi River Golf Course. The region is home to South Africa’s premier golf course – a Gary Player masterpiece located on the frontier of the Kruger National Park.

Leopard Creek is the famous Rupert family’s pride and joy. The course is home to the annual Alfred Dunhill Open and has continually ranked as the number 1 golf course in South Africa (out of 500+) by the Golf Digest. 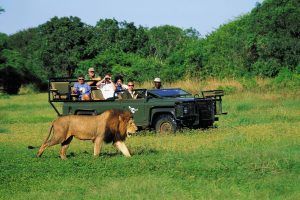 Limpopo is South Africa’s northernmost province, lying within the great curve of the Limpopo River. It is a region of contrasts, from true bushveld country to majestic mountains, primeval indigenous forests, unspoilt wilderness and patchworks of farmland.

The province borders the countries of Botswana to the west, Zimbabwe to the north and Mozambique to the east. In the eastern region lies the northern half of the magnificent Kruger National Park, a nature reserve teeming with African wildlife in a total area roughly the size of Israel.

The capital is Polokwane, lying in the middle of the province. Further north is Modimolle, the hub of the local table-grape industry set near the beautiful Waterberg mountain range; Makhado at the foot of the Soutpansberg mountains; and Musina, with its thick-set baobab trees.

Limpopo Province has an impressive road network, including the N1 highway that crosses the province from south to north, bypassing major towns such as Bela-Bela, Modimolle, Mookgophong and Mokopane, before reaching Polokwane.

The Waterberg Region is home to a host of newly developed golf courses such as Zebula, Elements, Annika Sorrenstam’s Euphoria and Waterberg Estate. However, the most exciting golf course in the world has been created at the Entabeni Safari Conservancy: Legends.

Legends Golf Course is a totally unique concept in that every hole was designed by a different course architect. 18 in total came together in order to create a total masterpiece in the African Wilderness. These course architects are perhaps better known for their performance on the course but the collective golf knowledge one gets when combining Bernhard Langer, Sergio Garcia, Colin Montgomerie, Justin Rose, Vijay Singh, Mike Weir, Padraig Harrington, Ian Woosnam, Retief Goosen, Jim Furyk, Trevor Immelman, Kj Choi and many other great names; one can expect a championship course of note.