Gauteng is known as the “Place of Gold” as it is the commercial and industrial powerhouse of the country. From the leafy streets and diplomacy of Pretoria to Johannesburg’s vibrant city life, Gauteng is a cosmopolitan mix of people from all walks of life.

Gauteng is where the creative spirit of a nation converges in a dense, cultural heartland. Gauteng’s primary attraction is big business, but there is so much more to this province. There is a wealth of culture to be mined in the museums, galleries, art routes and historical battlefields. Gauteng is also an entertainment playground, offering a plethora of world-class shopping malls, restaurants, cafes, theatres and music venues.

With only 1.4% of South Africa’s land area, the tiny province of Gauteng punches way above its weight, contributing 33% to the national economy and a phenomenal 10% to the GDP of the entire African continent.

Gold and the history of Johannesburg are intertwined. The discovery of gold in the late 1890s led to a gold rush by prospectors from all over the world to the area now known as Johannesburg in the province of Gauteng. Today, Johannesburg generates 16% of South Africa’s GDP and employs 12% of the national workforce.

It has a financial, municipal, roads and telecommunications infrastructure that matches leading first world cities, yet the cost of living is far lower. Joburg is a diverse and cosmopolitan city offering fascinating museums and art galleries, nature reserves and hiking trails, craft markets, nightclubs, city tours and fine restaurants.

The energy of the Highveld, with its intense summers broken only by intermittent thunder storms, is echoed in the sheer buzz of the place. In Johannesburg people walk and talk fast, they drive at high speed too, and the ever increasing skyline – as glass and chrome structures rise like mushrooms seemingly overnight – reflects the rapid development that has taken place in the city in the last 10 years.

Known as the Jacaranda City or “Jakarandastad” in Afrikaans, for all the purple blossom-bedecked trees which line its thoroughfares, Pretoria is a lovely, quiet capital. It has a long, involved and fascinating history which dates back to the days of the Voortrekkers.

Here you will find many significant old buildings and some fascinating museums. The Transvaal Museum has wonderful natural history displays and is the home of Mrs Ples, the australopithecine fossil found at Sterkfontein in the Cradle of Humankind. Also worth visiting are the Cultural History Museum and the Smuts Museum, just outside town.

A summer-rainfall area, Gauteng has hot summers and cold winters with frost. Hail is common during summer thunderstorms.

The people of Gauteng have the highest per capita income level in the country. The province blends cultures, colours and first and third-world traditions in a spirited mix, flavoured by a number of foreign influences. The world’s languages can be heard on the streets and in offices, from English to Mandarin, Swahili, French, German and more.

Not only does Gauteng boast a particularly suitable climate for golfing, it also offers the golfing enthusiast a wide selection of world class golf courses which will challenge the amateur and professional alike. Johannesburg boasts some particularly fine golf courses, a number of which have hosted European PGA Tours and South African Sunshine Tour events. Within one hours drive of the Sandton area you will find more than 30 of the Top 100 golf courses in South Africa – 30+ excellent reasons for the golfer to visit our Gauteng Golf Courses. 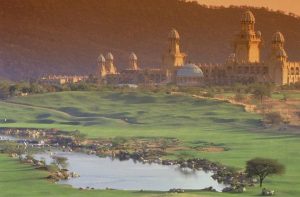 Deep in the rugged bushveld, in the heart of an ancient volcano, lies the world’s most unique resort, the internationally acclaimed Sun City. The Resort has a unique heartbeat and an African rhythm of its own and is unlike any other Resort destination in the world. This is pure fantasy and your every desire is met.

The fabulous Suncity resort complex captivates visitors with its combination of golf, leisure, safari and gambling as well as world-class accommodation. Formerly the gaming capital of Africa, Sun City is still a hotspot for those wishing to gamble but also for those just wishing to relax. Nevertheless, the focus is now on the total experience of stylish entertainment in Africa.

There are four hotels at Suncity, each offering a choice of accommodation with its own style, character and ambience. Choose from the luxury of The Palace of the Lost City to the perfect family holiday venue at the Cabanas. No matter what you are looking for, be it romance, value for money, family fun or sheer decadence, you will find it at one of the superb hotels situated in Sun City South Africa.

Visitors can find the latest in entertainment and gaming in the Entertainment Centre, plus a wide range of fast food outlets, night clubs, restaurants and children’s facilities. These range from a variety of restaurants, a kiddies games arcade, to Slots floors and the Superbowl which boasts performances by world famous artists.

Overnight visitors to any of the hotels at the Sun City Resort have free access to the Valley of the Waves. This is the most advanced Waterpark in Africa. A large lagoon dominates the scene with a wave machine capable of generating 1.8 metre waves every 90 seconds. This water park has five exhilarating flume rides.

From the aptly named Temple of Courage, swimmers drop a heart stopping 17 metres down a chute and under a bridge before splashing into a small pool at the foot of the slide. For the less adventurous visitor to the Sun City Resort why not take a ride on the Lazy River?

A variety of sports activities may be enjoyed at Sun City. Year round good weather in this part of South Africa, ensures that tennis, squash, swimming, golf, mountain biking, horse riding, and parasailing are all on offer throughout the year.

Sun City has laid out spectacular jogging trails. The Gym and Health Spa keep you perfectly toned, and a beauty treatment is the perfect way to wind down after a workout. A wide range of water sports including water-skiing, parasailing and sunset cruises can be enjoyed at the resort’s Water World.

Bordering the Sun City Resort, the Pilanesberg National Park covers some 55 000 hectare and is the fourth largest in southern Africa. This malaria-free park is perched on the eroded vestiges of an alkaline volcanic crater – one of only three such craters in the world.

Since late 1979, thanks to Operation Genesis – the largest game translocation ever undertaken at the time, tourists have been able to see Africa’s wilder side up close and personal.

The park boasts healthy populations of lion, leopard, black and white rhino, elephant and buffalo – Africa’s “Big Five”. A wide variety of rare and common species exist with endemic species like the nocturnal brown hyena, the fleet-footed cheetah, the majestic sable, as well as giraffe, zebra, hippo and crocodile, to mention but a few.

A golf holiday Sun City Resort is an awe-inspiring experience. There are also so many world-class golf courses to choose from in the surrounding area. The diverse choice makes it hardly possible to play enough of these stunning courses during one single trip.

Sun City can lay claim to having two of the best golf courses in Africa. Both courses were designed by the well-known Gary Player and offer challenging par-72 courses in extremely scenic surroundings.

The tree lined Gary Player Country Club course is acknowledged as a challenging and demanding course – to be enjoyed by both novices and professionals alike. The course is home to the annual Nedbank Million Dollar Golf Challenge and still remains one of Gary Player’s most spectacular courses.

The Lost City Golf Course is a unique experience and offers spectacular views across the bushveld. With its desert style design and the contrast between green fairways and the surrounding bush this is a course with great appeal. Also to be noted are the use of bunkers and extensive water-features; including the par 3 13th, where 38 massive crocodiles surround an island green!

Come and enjoy an unforgettable golf safari holiday at Sun City Resort and enjoy some of the best golf and entertainment that South Africa has to offer.

Enjoy browsing through our Gauteng and Sun City golf holiday packages below.